Following an executive session, the Vassalboro Board of Directors unanimously authorized City Manager Mary Sabins to negotiate and sign a contract to have the building demolished and the remains removed. (Town Line File Photo by Roland D. Hallee)

The selected members of the Vassalboro Board of Directors began their June 9 meeting with a party, acknowledging the last meeting of outgoing Board Chairman Robert Browne.

After cake and cold drinks, they went into an executive session with city attorney Kristin Collins to discuss the demolition of the old North Vassalboro Church. 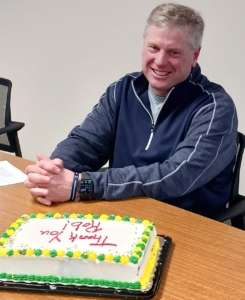 Vassalboro Chairman of the Board, Rob Browne, was recognized at his last board meeting. (photo courtesy of Mary Sabins)

After the executive session, they unanimously authorized City Manager Mary Sabins to negotiate and sign a contract to have the building demolished and the remains removed. The focus will be on removing the building, which has been declared unsafe; objects accumulated on the ground will be moved as needed to allow access to the building.

Council members discussed details like making sure owner Chad Caron is notified and providing police escort to the demolition contractor. North Vassalboro resident Raymond Breton urged caution with the many sharp, heavy and damaged objects on the ground.

Caron is said to have an alternate storage area on Reynolds Road. Board member Barbara Redmond said he will have a reasonable amount of time to move more stuff there if he wants.

The land will remain in Caron, Redmond said. The municipality will bill him for the demolition costs.

In other matters, on June 9, by unanimous vote, some members of council adopted the compensation administration policy they discussed earlier in the year, establishing a pay scale for city employees. .

Sabins reported that contracts to transport bulky waste and municipal solid waste (MSW) from the transfer station to disposal sites expire in August. She offered to either look for new offers or negotiate with current contractors for one-year extensions.

Sabins said transfer station manager George Hamar is happy with the current carriers and, to his knowledge, they are happy. Some board members unanimously cleared her to negotiate one-year contract extensions.

Lauchlin Titus, a resident of North Vassalboro, asked Sabins to ask carriers to remind their drivers to obey speed limits. Sabins said she did it once years ago with no problem.

Sabins shared another truck-related issue raised by members of the fire department: A tractor-trailer parked intermittently near the pantry and the North Vassalboro fire station threatens to damage fresh pavement. Police Chief Mark Brown intends to speak with the driver.

Board member Chris French asked Brown about crime statistics in Vassalboro, which led to a discussion about whether to repeat the neighborhood watch program held in North Vassalboro about a year ago. decade. Brown urged residents to report suspicious activity to law enforcement professionals and let them act.

Vassalboro Legion Post Commander Tom Richards raised another North Vassalboro question: who owns the flagpole that stands with the stone monuments in front of the old North Vassalboro school, the old municipal office, and the old health center? Breton now owns the land and the building.

Richards said the Legion post had recently replaced the mast. With little money and no fundraising plan — there are only about 25 members, “and you’re pretty much looking at the youngest,” Richards explained — the Post had billed the city.

At Sabins’ suggestion, some board members approved closing the transfer station on Sunday June 19 for the new June 19 public holiday. The town hall will be closed on Monday, June 20 to observe the public holiday.

The next regular meeting of the Vassalboro Board of Directors is scheduled for 6:30 p.m. on Thursday, June 23.

If you enjoy reading The Town Line and the good news we bring you every week, would you consider making a donation to help us continue the work we do?

The Town Line is a private 501(c)(3) non-profit foundation and all donations are tax deductible under the Internal Revenue Service code.

To help you, visit our website donation page or send a check payable to The Town Line, PO Box 89, South China, ME 04358. Your contribution is appreciated!