We all like to celebrate our birthdays doing the things we love. For some of us, it might be throwing a lavish party, and for others, it might just be a simple celebration with our family. For Kunal Kemmu, it is surely the latter! The Golmaal again The actor recently celebrated his 39th birthday doing everything he loves! Typically, you’ll find him spending time in the gym and occasionally sharing some of his cooking adventures. But, when it comes to her birthday, Kunal has left no stone unturned! The actor flew from India to his favorite restaurant and spent quality time with his family. And it’s not just that! Kunal also celebrated his birthday in mid-flight!

(Also read: Kunal Kemmu recalls how Pizza saved him at 4am in New York (see post)

Taking to Instagram, Kunal posted a video where he was seen cutting a cake with flight attendants. In the video, Kunal is standing in his seat, and the flight attendants are with him with two chocolate muffins topped with cherries. As he cuts the cake, everyone can be heard singing happy birthday. Then he takes a small bite of the muffins! In the caption to that post, he wrote, “Woke up to this in-flight birthday celebration by the lovely flight crew. It’s a first for me so it was special. Happy birthday.” Take a look at the video here:

Continuing the birthday celebrations, his wife and actress Soha Ali Khan also posted glimpses of the day. In one of the photos shared on Instagram Stories, Kunal sits with their daughter Inaaya who is playing with chopsticks. In front of them is a menu of Asian cuisine. The story read, “Birthday lunch! @kunalkemmu.” Take a look here:

Then, in the following story, the actor appears to be standing in front of a restaurant. As Soha Ali Khan shared this photo, she also revealed that her husband was “waiting outside his favorite restaurant in the world for the birthday dinner.” Check out the story here: 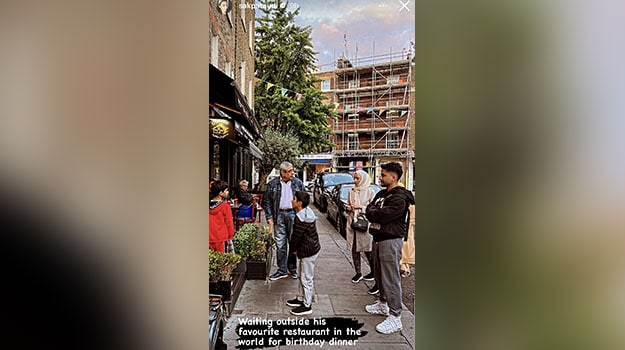 Meanwhile, Kunal Kemmu will be seen next in Vipul Mehta’s Kanjoos Makkhichoos. He is also a cast member of the popular online series Abhay.